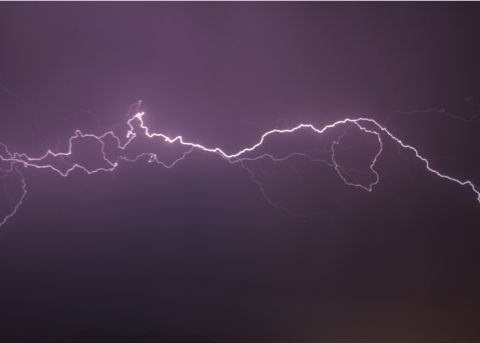 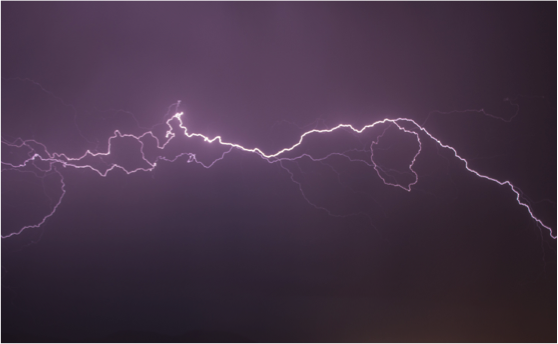 The Difference Between Lightning Protection and Surge Protection

Lightning is known to be the most significant source of surges—bolts have been recorded to have a million to a billion volts and between 10,000 to 200,000 amps. However, lightning only makes up a portion of all transient events in a facility.

Because transients can originate from both external sources (like lightning) and internal sources, facilities ought to have both a lightning protection system and surge protection installed.

This begs the question: what is the difference between these two systems, and how do they work together?

Quite simply, a lightning protection system protects a structure from a direct lightning strike.

To do this, an air terminal (or system of air terminals) is placed in the most probable position to capture the direct strike, based on the structure’s architectural design and roof equipment. The rest of the system is designed to safely convey that electrical energy from the lighting strike to ground as efficiently and safely as possible.

To intercept the strike and conduct the high current energy of a lightning strike into the earth, system components include the:

A surge protective device (SPD) is designed to protect electrical systems and equipment from surge and transient events by limiting transient voltages and diverting surge currents.

What causes transients and surges?

Lightning is the most spectacular form of an externally generated surge, however, it is estimated that 65% of all transients are generated internally within the facility by the switching of electrical loads such as:

How does a SPD work?

There is at least one non-linear component of the SPD, which under different conditions, transitions between a high and low impedance state. At normal operating voltages, the SPDs are in a high impedance state and do not affect the system. When a transient voltage occurs on the circuit, the SPD moves into a state of conduction (or low impedance) and diverts the transient energy and current back to its source or ground. This limits or clamps the voltage amplitude to a safer level. After the transient is diverted, the SPD automatically resets back to its high impedance state.

What Sets the Two Systems Apart?

On a basic level, the lightning protection system protects the facility and structure from direct strikes, while SPDs protect electrical equipment and systems against surges or transients.

How the two operate, and the components involved, also vary. Lightning protection system components are always in place and ready to function, while SPDs monitor internal system voltages and spring into action if a transient voltage occurs on the circuit.

How the Two Work Together

Though lightning is not the most common transient event, it is the most significant. While a lightning protection system protects the exterior against the affects of lightning, SPDs must be in place to support the other system and the related transients a strike creates. SPDs will activate and begin to conduct energy into the grounding system if surges to bonded equipment exceed the designated rating.

Lightning is the most likely external cause of a significant surge, and SPDs must be installed to limit currents entering into the internal environment, showing the importance of an interconnected facility electrical protection system.

Not all UL listed SPDs are necessarily rated for use with a lightning protection system. What this rating means is that it can handle greater surges than devices with a lower In rating.

Lightning and surge protection are two elements of an effective electrical protection system. Download the nVent ERICO Lightning Protection Handbook for an in-depth look at the comprehensive system and its components.