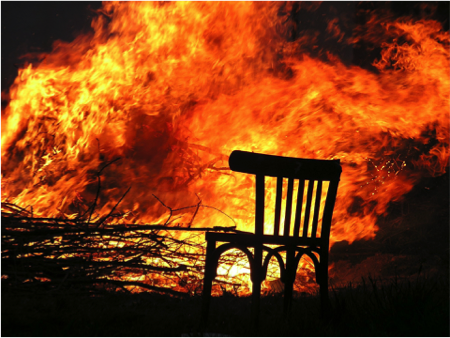 Fires Caused By Lightning: How to Protect Your Facility

From 2007 to 2011, it’s estimated that U.S. fire departments responded to an average of 22,600 fires started by lightning per year. While humans cause more fires than lightning, studies show that the devastation of lightning-caused fires is significant.

The harm of direct lightning strikes is widely known, but recognizing the prominence of fires caused by lightning is equally important to understand, as we can play a role in minimizing them.

Continue reading to learn how lightning causes fires, and how you can protect your facility from the associated damage.

You can probably hear Smokey Bear saying it now: “Only you can prevent forest fires.” Believe it or not, that slogan started more than 60 years ago, and still has relevance today. Recent research shows, in fact, that humans cause 84% of all wildfires.

While that staggering number should put you on guard, an emphasis on fires caused by lightning strikes cannot be ignored. Lightning triggers about 14% of all reported wildfires, and these fires damage far more land than those caused by humans—an average of 500 acres per fire compared to 40 acres.

The Damage of Lightning-Caused Fires

Wildfires in open fields and forests across the Midwest and West Coast capture the news for their widespread devastation, but fires in the home may be your biggest concern. From 2004 through 2008, only 18% of lightning fires occurred in homes, but these accounted for 70% of the direct property damage, which equated to $407 million.

How Can Lightning-Induced Fires Be Prevented?

Lightning protection systems require a systematic and comprehensive approach to minimizing threats caused by transients, which are the surges in voltage that occur from lightning strikes. The four-step protection process includes the following:

Whether you are responsible for the protection of a residential home, facility or other entity, consider the role you play in protecting it from all lightning-related fires seriously.

As mentioned in the four-step protection process, interception of the lightning flash is the critical first step. Without effective air termination placement, the rest of the system will be ineffective in protecting the structure. A massive study of the Collection Volume Method (CVM) for lightning protection systems provides new understandings of air termination placement. Download your copy of the study today.