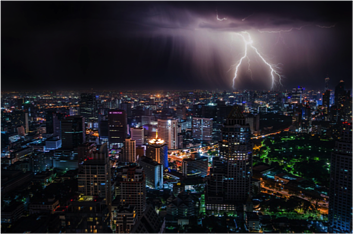 This following is part of our telecom lightning protection series, which is based on our whitepaper “Earth Potential Rise in Public Spaces Near Telecommunications Facilities,” that was published in IEEE and presented at Intelec 2018. You can download the full whitepaper here.

Traditionally, telecommunication networks were housed in secure structures or locations, keeping them at an adequate distance from very dense populations.

Lightning strikes to telecom facilities in these densely populated locations can cause headaches and costs for facility owners, including:

Historically, lightning protection and earthing system requirements for telecommunications facilities has been focused on protecting the facility and equipment.

While this method works for most facilities, in densely populated cities, attention must also be given to properties located close to the radio tower. The existing standards and design methods do not fully consider the effects a lightning strike to the tower may have on these nearby structures.

In this post, we assess the three problems this creates, and provide general solutions to those complications.

Lightning strikes to the tower can cause inductive coupling or direct-coupled currents in incoming power lines, which are inherently connected to nearby dwellings through the main power reticulation. These can travel in both directions in power line, traveling to switchboards and earthing systems of nearby buildings. 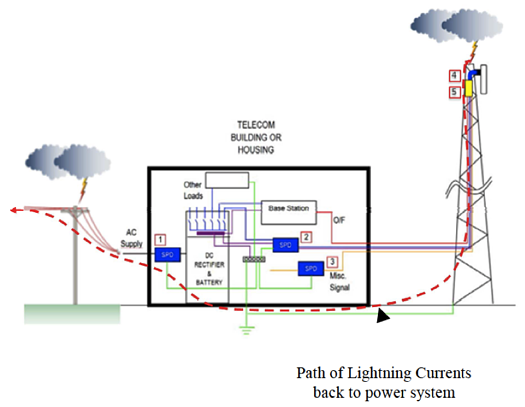 To help control these induced electrical surges, the correct surge protective devices (SPDs) must be applied to the switchboard that powers the radio site.

Traditionally, spark gaps or metal oxide varistors (MOVs) have been commonly applied to this location. Though these often have adequate lightning handling capabilities, they have relatively high let-through voltages and leave high voltage and current rise times. These effects can allow the lightning surge currents to travel to nearby facilities.

To mitigate this, surge reduction filters (SRFs) can be used at the entry point of the radio site. Well-designed SRFs have significantly lower let-through voltages and attenuate the voltage and current rise times significantly.

Another method to alleviate remaining surges is to apply traditional SPDs at the main switchboards in nearby dwellings. This may not be as practical, depending on legislation and the culture of the country. It also often involves higher costs than SRFs.

When lightning strikes a cell tower, the large amount of lightning current injected and dissipated in the earth near the tower can cause severe earth potential rise (EPR). It can drastically increase voltage gradients in the earth, even finding its way through the neutral and the earth electrodes into nearby dwellings. 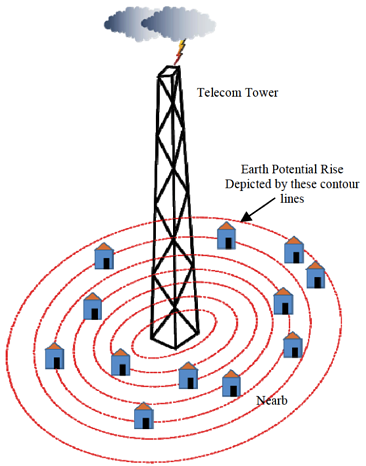 The large EPR described above can be mitigated by careful design of the earthing system, as earth resistance must be kept as low as possible—2-5 ohms

More importantly, the geometry of the earth electrode system should be kept symmetrical. The design should consist of multiple ring conductors and intuitively have low impedance.

Low impedance can be achieved by:

Though often impractical, a more effective method to mitigate the large EPR radius is to have ground rings encompass nearby facilities.

3. Electrical Surges In Nearby Facilities

A rapid rise and fall of magnetic field caused by lightning can cut through electrical wires and result in electrical surges entering nearby facilities. 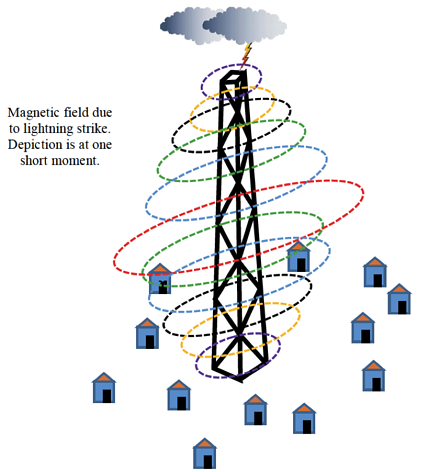 While these magnetic effect caused by a lightning strike are impossible to control, this problem has the lowest current magnitude. This is because magnetic effects decay rapidly with time and distance. Unfortunately no practical solutions exist to solve this problem, but awareness of the issue should inform design of these facilities in highly populated areas.