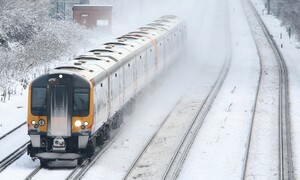 During the recent polar vortex that brought temperatures as low as -60 F through the upper Midwest of North America, there were many news stories highlighting the extreme measures railways take to keep tracks clear of snow and ice buildup. Switches are one of the most critical aspects of rail infrastructure, which is why switch heating solutions are often the focus when describing how railways operate in extreme cold, snow and ice. There are, however, other areas of track infrastructure that equally critical to safety and reliability that railways account for as part of a winter operational plan.

Third rail (also called contact rail), for example, provides electrical traction power that propels rail vehicles in many types of passenger rail networks throughout the world. Third rail could be susceptible to loss of traction due to snow and ice-buildup, leading to major service disruptions that could leave passenger stranded. In addition to rail switch heating, nVent offers heating solutions for other critical rail infrastructure, including an innovative line of heating systems specifically designed for third rail electrification.

Third rail electrification is typically used in rapid transit systems (subways and other urban metros), which include over 150 networks throughout the world, spanning over 10,000 track miles. In third rail electric systems, the third rail (also called a contact rail) is a power conductor that transmits energy to the train, providing traction power for propulsion. Third rail  is usually located on the outside (and running parallel to) the two running rails. Trains are equipped with a sliding ‘pickup shoe’ that transmits energy from the third rail to the train. The ‘shoe’ maintains continuous contact with the third rail, and does so with the help of gravity reinforced pressure from springs. If contact between the ‘pickup shoe’ and the third rail is broken, the train will lose power. There are several types of contact positions in third rail electrification, including the most common where the shoe makes contact with the top or bottom of the third rail, but there are also side contact configurations and other various contact assemblies.

Snow and ice build-up can disrupt contact between the third rail (conductor) and ‘pickup shoe,’ which can reduce efficiency, or entirely prevent contact leaving trains stalled. This problem is prominent in rail yards, areas with steep inclines/declines and near stations. Third rail systems with top contact are more prone to snow and ice-buildup, although large quantities of snow can disrupt operations in other configurations as well. Some networks operate de-icing trains that dispense melting chemicals, however, many networks lack a dedicated process for keeping third rails clear in winter conditions. Innovative third rail heating systems from nVent RAYCHEM are the perfect solution for rapid transits with third rail electrification operating in regions where winter weather can disrupt service.