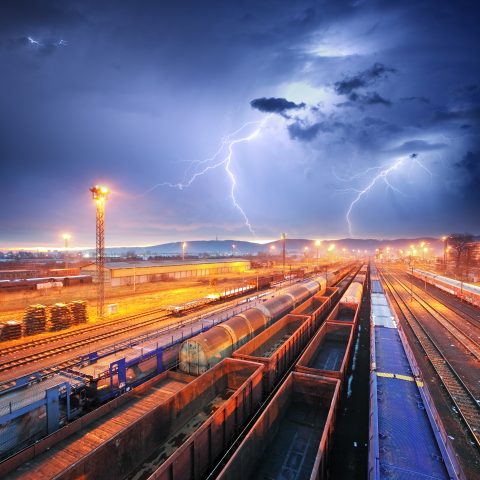 Severe weather, with heavy rain, hail, and dangerous cloud to ground lightning can occur anywhere in North America, creating a challenging environment for railways, especially during the summer months of June, July, and August.  Protecting critical assets, specifically railway signaling and communications systems (C&S), is essential to providing safe, reliable service. nVent ERICO is a leading provider of railway electrical protection with a product portfolio that includes direct strike lightning protection, grounding, and bonding, as well surge protection devices for track circuits and wayside equipment. Installed in railway properties such as classification yards, and bungalows, these products strategically combine to form a comprehensive electrical protection approach called the nVent ERICO Six Point Plan of Protection. This blog post is the first in a series describing how nVent ERICO railway electrical protection solutions, and the Six Point Plan of Protection, play a key role in protecting critical railway C&S infrastructure. The following provides an introduction to the Six Point Plan of Protection, and an example of how this system was used to protect a classification yard during a major lightning event.

Lightning strikes, whether direct (or indirect) can induce transient over-voltages onto the track that may harm or destroy wayside equipment and solid-state electronics. The effects of such disruptions range from nuisance resets that require immediate attention from maintenance personnel to severe C&S infrastructure damage that brings rail service to a halt. The costs of even an isolated outage increase rapidly, and can upend operating strategies such as Precision Scheduled Railroading.

The nVent ERICO Six Point Plan of Protection provides an approach to:

The first three tenants specifically address lightning strike protection and hold that by capturing the strike and directing the energy towards a preferred location, railways can protect critical wayside equipment and systems.

nVent ERICO lightning protection systems are installed at railway properties throughout the world including classification yards, microwave installations, bungalows, and wayside signal locations. Recently one of our freight rail customers experienced a lightning event at its Midwestern hump yard. Recorded at 470ka by a third party weather tracking service, this event happened to be the most intense lightning strike that nVent ERICO has encountered (with the average lightning event recorded at less than 200ka). Installed at this location was the nVent ERICO System 3000 (air terminal and down conductor) lightning protection, along with an advanced grounding system and surge protection. During the above-mentioned lightning event, nVent ERICO System 3000 captured the lightning strike, bearing the brunt of the impact and preventing the trike from attaching to unprotected structures or the track within the yard. While the force of the strike caused minor damage to the area immediately surrounding the strike, the advanced nVent ERICO grounding system dissipated the transient energy, preventing damage to critical hump yard equipment and system that can cost several hundred thousand dollars to replace. This railroad appreciated the ability to channel lightning strike energy to a preferred location, and is currently working with nVent ERICO further enhance its lightning protection system in the yard. 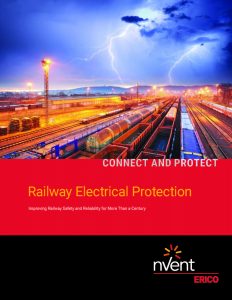